Beijing- The Chinese Foreign Ministry informed the United States Embassy in Beijing on Friday that China has decided to withdraw its permission for the establishment and operation of the US consulate general in Chengdu, according to a statement released on the ministry’s website.

The Chinese side has also made specific requirements on the ceasing of all operations and events by the consulate general, it said.

The measure is a legitimate and necessary response to Washington’s previous unwarranted move of abruptly asking China to close its consulate general in Houston, added the statement.

The current situation faced by China-US relations is not what China desires to see and the responsibility rests entirely with the US side, it said.

The Chinese side, once again, urges the US side to immediately retract its wrong decision and create necessary conditions for bilateral ties to return to normalcy, the statement said. 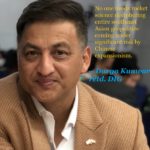 Who Let the China Out- Is China’s peaceful rise possible?